Toilets Please for Dundonald Park (TP4DP) is research report undertaken for GottaGo! about the need for a public toilet in a busy park in the centre part of Ottawa by Kristina Ropke in 2015. Ropke surveyed 282 residents, both immediate neighbours and people from surrounding high rises.  Over 80% were in favour of getting a toilet.  For many seniors and low income people in the apartment buildings, the park was their only access to the outdoors, but they were prevented from spending time there by the lack of an accessible public toilet. The full report is available here TP4DP report.

Flushing Inequality: a research project to assess the state of Ottawa’s municipally-funded toilets. (May 2016). A team of MSW students from Carleton University working with GottaGo! looked at a large sample of Ottawa toilets and found them sadly lacking.

The City of Ottawa staff prepared a report in May 2015 at the request of Councillor Catherine mckenney about the costs for providing toilets in public parks. In our view, this report is superficial, inadequate and inaccurate. There are no references provided. You can see the report  here: City staff report for Councillor McKenney

Washington, Kate. Before you go: How public toilets impact transit usage PSU Online Scholars Journal, vol 8, #1, Article 5. 2014. A study of the relationship between public toilet provision and transit use. The article provides many useful references to other studies in other cities, but found that, for Portland, a relationship could not be established as to many other factors were in play.

The article includes the following (on page 8):  “In England, professors Clara Greed, Julienne Hanson and Jo-Anne Bichard have dedicated several years to the study of public toilet availability and accessibility, concluding that public toilets are the missing link to
increasing transit ridership (Bichard, Hanson, & Greed, 2013, p. 21). In a chapter of her soon to be published dissertation, Bichard (2013) uses two metaphors to discuss this argument. One is the “bladder leash,” which constrains how long people can be away from home (and, therefore, how far they can get from home via their various modes of transportation) before they need to use a toilet (p. 21). This varies depending on gender, age, medical history, and whether or not a person is traveling with children. The second metaphor is the “transportation chain,” which is the link of trips any commuter takes in order to get from one place to another (Bichard et al.,
2013, p. 21). For most transit users, the first link is a walk from home to the transit station. From there, the chain can include bus, streetcar, rail, bicycle, automobile, and more walking before a day’s commute is complete. The current approach to transit is very linear, reflecting a “one size fits all” model that does not take into account the flexibility of many people’s lives (Bichard
et al., 2013, p. 21).’

” …TTC washrooms were regarded as smelly, dispiriting hellholes until 2012, when all were refurbished with new fixtures, plumbing, floors and wall tiles, a relieving transformation. It delighted customers and seems to have improved their overall perception of the system. Complaints to us about TTC problems dropped significantly after the redo; call it the Good Washroom Dividend. But it may have created an expectation that the TTC would put washrooms into more stations, or even all of them. Danna Barrette summed it up in an email: “I think all stations should be equipped with washroom facilities for riders who need them in emergency situations, considering the children and older adults who use the TTC.” While it would be nice to provide washrooms in all stations, the cost would be so high that it can’t be done, said Chris Upfold, the TTC’s chief customer officer….”

A handsfree, self-cleaning bathroom for transit stations, by Eric Jaffe, in the Atlantic CityLab, February 17, 2015.  “Atlanta believes it’s found an answer: a high-tech, hands-free, self-cleaning, vandal-resistant, loiter-proof bathroom built to address every mass transit agency concern and offer safe and sanitary service to the fare-paying public. This super-loo opened about a month ago in MARTA’s Lindbergh Center Station, with plans for a second in East Point Station. If the two pilots work well, they might just change the way transit agencies across the country view station bathrooms….Herrera calls the new model a big upgrade from the pre-fab automated public toilets used in the past. Those designs have been criticized as too costly—a July 2008 piece by Paige Williams in Atlanta magazine was headlined “Does This Smell Funny?”—but Herrera says you can’t make a good public toilet for any less than it cost to make Lindbergh. Both he and MARTA put the installation cost at about $100,000.

“This is the lowest-cost possible solution for mass transit public restrooms,” he says.”
A chart of restroom availability at Major American Subway Systems from the American Restroom Association:

Why Don’t American Subway Stations Have Public Bathrooms? The Atlantic City Lab January 13, 2013:  An article on the limited number of open bathrooms on subway lines in New York, San Francisco, Washington DC. Although many have been closed because of operating costs and fear of terrorism since 2011, many are still open. The article enumerates how many are open in New York, San Francisco, Washington DC.

Changing policy re: toilets in subways in Washington DC: from the Washington Post, June 7, 2014.  “Each new station on the new Silver Line — McLean, Tysons Corner, Greensboro, Spring Hill and Wiehle-Reston East — will have its own state-of-the-art restroom facilities. Each station will have four restrooms — two for men, two for women — that will be in plain sight, unlike the maority of Metro restrooms, which are hidden in hallways behind locked, nondescript doors.”

San Francisco.In the process of reopening their subway toilets which were closed due to fears of terrorism after 9/11. BART may provide relief for riders by reopening bathrooms., San Francisco Chroncile, June 24, 2015. Article provides information on costs etc.

Results of closure of many BART stations post -911.
Escalators in San Francisco’s BART transit system shut down after being treated as toilets, July 27, 2012. “People are actually treating the moving stairs as a toilet, leaving Bay Area Rapid Transit workers to discover so much human excrement at one broken Civic Center Station escalator last month that a haz-mat unit was summoned… There were five escalators shutdown in the city’s downtown train system this week. While it’s unclear the exact causes, the late-night mucking up of the machinery is linked to a lack of public restrooms in the area, officials said….Until something can be done, the system’s 105 million users will have to deal with the breakdowns.”

Australia: National Public Toilet Map. As part of the National Continence Program, the Toilet Map provides information on over 16,000 publicly available toilets across Australia, including accessibility, opening hours and facilities, such as showers & baby change areas. Downloadable as an app.

Toilet Tube map: A map of public toilets in the Tube stations in London.

Vancouver.  A major debate is unfolding about public toilets on the Translink system. An article from The Province in July 2, 2014, highlights some of the key features of the debate.
Translink public toilets debate: the Province, July 2, 2014. Public washrooms included in provisions, but debate over contracting out to third party.  Clickor  a Map of Automated Public toilets in Vancouver

“Public toilets: Free and eco-friendly. Paris public toilets have been revamped. The city’s 400 automatic public toilets, designed by Patrick Jouin for the City of Paris and operated by Decaux, were redesigned in 2010 to make them safer, more comfortable to use, more hygienic and more eco-friendly. Each time the toilets are used, the toilet bowl and the floor are automatically cleaned, dried and disinfected. A manually operated emergency exit, which can be opened by firemen, for example, is accessible from the outside. Emergency lighting and a fire extinguisher have been installed to optimise safety. Comfort has also been enhanced.

“The doors open and close automatically and the toilets are heated in winter and equipped with coat hangers, a mirror, a washbasin and even background music. In a move towards sustainable development, the new automatic toilet uses 30% less water than the previous model. The lighting is natural – it is supplied by a well of light placed on the roof. It is equipped with a motion sensor and therefore only works when the toilet is occupied. The entire electricity supply comes from renewable energy sources (wind, solar, hydraulic and biomass).

“The locations of these free toilets, which are open from 6am to 10pm, have also been changed. More free toilets have been added to the major tourist areas (Invalides, Montmartre Hill, coach drop-off points etc.) as well as food markets and taxi stands. Besides the automatic public toilets in Paris, there are free public toilets in all the sightseeing spots and public spaces in the city open to visitors (museums, historic monuments, parks etc.). No fewer than 95 Paris parks and gardens have free toilets, open during park opening times. The City of Paris has also made public toilets open from 10am to 12pm and 1pm to 6.15pm available to users near shops and public and tourism establishments.”

For persons with disabilities in Paris, a practical guide to free public toilets. 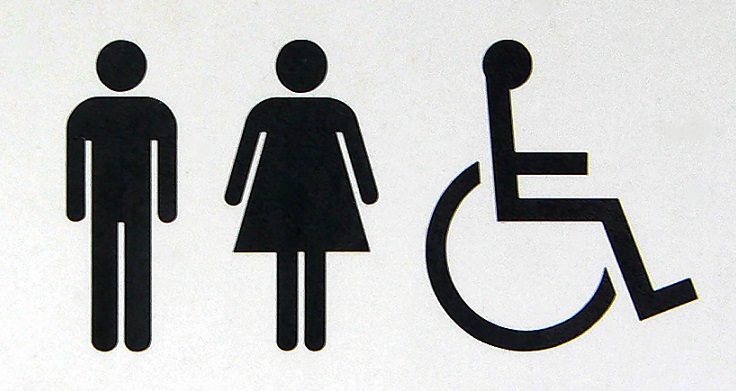